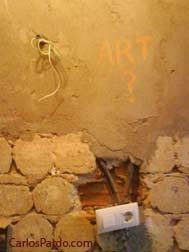 The alternative of being non alternative. By Carlos Pardo Vázquez (painter from Spain)

Nowadays the alternative is showed in great museums as C.N.A Reina Sofía (Madrid), Guggenheim (Bilbao), and other of hundreds of galleries around Spain, USA or the world and this phenomenon is accepted as normal. I will not discuss "what is Art". It seems that the actual flag of art is “everything is accepted as Art" as it had been nominated as art by certain Galleries and headlines of critics. The spotlights turn on the so called “arts” by a board of Gurus.

It is similar to the trends established by fashion designers every season. An ordinary coloured photo without meaning or “message”, a twisted iron bar or a leg of a mannequin could be considered art if it is showed in a VIP concrete place where the mass media will repeat as an infinite echo what marvellous is it. Even other artists will repeat it apparently convinced about that because it shall let them call their own artwork “Art” every time if they are “discovered” by a Guru of Art.
Otherwise neither of them want be considered an ignorant out of the wave. “The ordinary people don’t understand” they use to say waiting to enter in the restrictive hall of fame of the Art. The Gurus gets into a panic if they discover that they are not informed about what is on, the pulse of the street, the protestation of an artist of supposed minorities, or the new artists supported by the government of outrageous dictatorships from the third World. They arrogate the power of converting the alternative or marginal into official art. So they are in the mirage of writing the History of art on the basis of ephemeral and worthless expressions they collect without a minimal understanding if it really is the expression of the beauty or the thought in a culture. Perhaps they believe that if they control the alternative putting it on a pedestal in the museums and galleries they kill or sleep it, avoiding a suppressive movement that kick them in their proud and pocket. Otherwise if non-alternative artists can’t access to the channels of art market and then dead poor in the end, and their artwork will be cheap to buy for the dealers and its value could grow up in the future. Collectors have more time and patient than non-alternative artists.
This way the alternative is nowadays official, and the non-alternative are marginal and neglected. This is a subtle form of repression of culture and control of market. The alternative as it lose that condition will be empty in its content and will be nothing and forgotten. The non-alternative will not grow up and the Art as an expression of mind remain reduced and gagged. It is the first step to take the power and to establish the silence as normal as happens in dictatorships. Note even in this countries the great monster of art market works and obtain greats benefits merchandising empty art certificated by the regime selling it in the first world as alternative.
Therefore today the best way to be alternative artist is being non-alternative. So if you paint graffiti’s in the night or take rubbish for sculptures or even put faeces in a tin can you will be terribly official artist, but if you paint or sculpt using proved techniques along the centuries to express new messages defending your culture… congratulations you are really alternative because you will stand in the shadows end will be scornfully looked and rejected. Blessed you are, you will be confirmed in the idea you are really fighting on right direction.The paradox is real and all of us know what is happening. Join to army of non-alternative, be authentic artist I only promise you poverty, sweat and tears but a clean conscience and some day perhaps the little glory of recognition from ordinary people.